Jack Castiglione has worked on civil rights issues in general but focused on LGBT rights beginning in the mid-1970’s when he moved to Long Beach, CA. Specifically, he worked to stop anti-gay violence, assisted people with AIDS, and engaged the Los Angeles Archbishop of the Catholic Church to change the Church’s negative view of LGBT Catholics and of all members of the LGBT community in general. (Read details.)

In working to stop anti-LGBT violence, Mr. Castiglione established a hotline in his home in 1986 and monitored it for 6 years. He interviewed everyone who reported a crime and took those reports to the Chief of Police with whom he served as an advisor for 6 years. He used a comprehensive, three-prong approach which was extremely successful: First, he informed the general public through newspaper articles that anti-gay violence was common in gay-populated areas. Second, he participated in annual police officer sensitivity training programs as a part-time instructor. His goal here was to help create awareness of anti-LGBT violence and the particular and critical problem that Long Beach Police officers did not consistently take anti-LGBT complaints seriously, sometimes refusing to even take a report to acknowledge that the crime happened. And third, he wrote many articles in the gay press, as well as gave talks, to encourage victims to report the crimes against them. Remarkably. within a few years, anti-LGBT crimes dramatically diminished. “We have made much progress in Long Beach, in California, and in the nation toward equality. Especially noteworthy is the monumental milestone of achieving our right to marry, which has recently been confirmed by the U.S. Supreme Court.” Mr. Castiglione added, “However, we do not have the luxury of resting on our successes, no matter how many or how monumental they are. It’s much like swimming upstream. There will always be a current against us. We have to thwart the persistent activities of those individuals, private organizations (especially conservative religious groups), and even many local and state governments, that seek to undermine, and reverse our accomplishments. We must even be concerned about our national government agencies that want to repeal every measure of equality thus far obtained. We must be vigilant. We must counter those anti-LGBT forces whenever and wherever they appear.”

A Gay Author Who Stopped Gay-Bashings and Murders 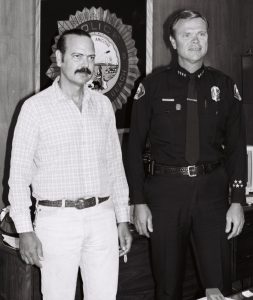 The Chartreuse Garden: The Horrific Murders of Innocents that Compelled Me to Fight Social Injustice and Hate was just released. In it, Castiglione confronts his obvious choice between maintaining his comfortable and secret gay life, or coming out publicly as a gay man in order to stand up and fight the brutality of hatred directed toward the most vulnerable in our society. <br><br>

We follow Castiglione’s growing up under the rules of his dominating and suppressive mother and surviving a childhood of bullying and beatings. During his young adulthood, he tried to sort out his sexuality, desiring to be straight. Then, an appalling, life-changing event. Roy, an impoverished little boy, begged Castiglione to protect him against those who bullied and beat him. “I will always be there for you, Roy,” Castiglione promised his adoring, innocent buddy. He never believed Roy was in actual danger, nor anticipated the shocking events that followed. <br><br>

Castiglione pledged to never again ignore a call for help. As he began to participate in the gay lifestyle, he became painfully aware of the beatings and murders of gay men in his community of Long Beach, CA, often perpetrated with impunity. He surrendered the security of his closet and publicly vowed to stop violent assaults against LGBTQ people. Here, we follow his journey in developing a successful, systematic approach to stopping hate crimes, which he details and offers to LGBTQ communities everywhere.<br><br>

These are tumultuous times! GayTies honors and supports this hero. Click on the Amazon.com link in the header for buying options. Help Castiglione get the word out that gay people, as President Obama stated, “… are worthy of equal dignity, equal respect, and equal protection under the law.”

Available on Amazon in Kindle and paperback versions.

(A big thanks the FOJ (Friends of Jack) group for putting this site together, Jack)