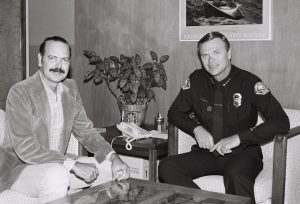 When I moved to Long Beach in 1975, gay rights were pretty much non-existent. It was to me, as bad as it could be, especial in a more progressive state like California. First, I need to give great credit to many long-time residences in the city who had been battling the City Council and the Long Beach Police Department for many years to get their attention to stop the violence. What I saw was a lack of focus and organization on this issue. The Gay Community Center was doing great things for the LGBT community in other areas, but there was no organized, coordinated approach to stopping the violence.

But in 1975, gay people, particularly gay men were bashed and harassed and often police officers would not help. It was so ridiculous. Gay people would report a crime against them, and sometimes the police officer would not take a report. The reason I heard most often (in those early years) was that the gay man who was beaten up was at fault because he was soliciting the assailant. and, I guess, it was less paperwork to believe the assailant. One other reason gay bashing continued was that gay men would not report the crimes because either they were closeted or because they felt they would not be believed. This is discussed in more detail in the sections below.

I’m not sure how I came to be in such a central role in trying to stop to stop anti-gay violence. I guess it was something I just felt so important, I needed to get involved, deeply involved. By the mid-1980s, I worked on a three-prong approach. First, was to get the LBPD retrained and re-educated to hate anti-gay crime seriously. Second, Educate the general (straight) community about the violence that was going on in their city. And third, educate the LGBT community that they MUST report any crimes against them. And, that I would assist them in this effort.

With all the violence going on, various groups brainstormed on what to do. A few new groups stated. I joined the group on hate crimes. I went to the Gay Community Director and asked if we could start a hotline to report anti-gay violence, He agreed, and based on my 5-year background on hate crimes issues (in the Lambda Democratic Club), I was allowed to monitor this phone in my home, and the Center paid for it. I did this for 6 years. It was the most important thing I did to stop the violence. I was honored to talk with every member of the gay community who reported a hate crime. Those crimes became a central theme in my book.

But I was to go back to working with LBPD. I was simply trying to get police officers to do their jobs. Gay and lesbian people pay taxes to, we help pay the salaries of the members of the Police Department. I recall going to a City Council meeting and making a point – being facetious, of course, “Look, members of the gay community are not allowed the protections of LBPD, then we should not have to pay taxes to support that department.”

At the time I first got involved with police issues, I was on the Lambda Democratic Club, on the Police Advisory Committee. I did not know the then Police Chief, Charles Ussery, except to discover that he seemed, by gay community accounts, disinterested in our anti-gay violence issues. He was not a person we could sit down and discuss issues with.

In 1987, Chief Lawrence L. Binkley was hired (and served until 1992). This was like night and day. I need to mention that chief Binkley was not a popular Chief among the rank and file. The press would refer to him as the “embattled Chief,” or the LBPD “embattled department. I don’t know any inside stories, but perhaps his negative image came from the fact that he fired a lot of officers he felt were not doing their duty, I heard it was like 85 officers that got canned. Many or most of those firings were fought in court. So it was a mess.

However, Chief Binkley was a true public relations guy. He reached out to the gay community to work with us. I quickly responded and accepted his invitation to join his Police Chief’s Advisory Community. I worked with him for his full tenure. He left the department in 1992. I can’t say we developed a personal relationship, but we certainly respected each other. Whenever I had a case of violence in my community, I’d take it right to him. He acted in all the cases I brought to his attention. One important program he initiated was special “cultural” training in the Long Beach Police academy. I’d come in one day and take about gay issues, as well as have interactions between the new police cadets and members of the LBGT community.

In 1992 William C. Ellis became Police Chief and served until 1996. (Jack Castiglione and Chief Ellis pictured above.) I had just a good a relationship with Chief Ellis as I did with Chief Binkley. I found him just as responsive. He carried on much of the openness style that chief Binkley did. I and the gay community, in general, were very fortunate to have two police chief very open to working with our community. Apparently, I was very popular with the department’s rank and file since my recommendations were sort after and considered a prize to have in their personnel files. See the next chapters for more on this subject.