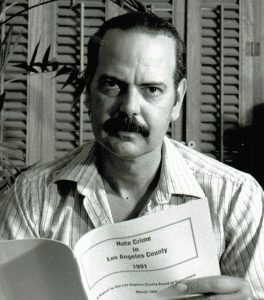 How Bad the Problem Was When Jack Castiglione Was Involved.

The cases mentioned, are only a few examples of actual incidents of hate crimes against the LGBT community. I could have easily included another hundred cases that happened in Long Beach alone. However, it may be more informative to discuss the general trends of these crimes and what I think they mean.

First, though, I’d like to define a hate crime. What is a hate crime? What are the police departments’ policies regarding such crimes? Let’s take a look at what has been established in the City of Long Beach, which seems, at least on paper, to be what has been generally established in other progressive cities. According to the Long Beach Police Department Administrative Directive number 89-16 titled: Hate Crimes, the policy and definition are:

Policy: The Department shall investigate reported or observed incidents of violence or threats directed at an individual, institution or business, motivated, all or in part, by race, ethnicity, religion, political affiliation or sexual orientation. The proper investigation of reported incidents of bigotry shall be the responsibility of all officers.

1. Definition: A “Hate Crime” is defined as an act or a threatened or attempted act by any person or group of persons to cause physical injury, emotional suffering, or damage to the person or property of another individual or group which is or appears to be motivated, all or in part, by race, religion, ethnicity, political affiliation or sexual orientation.

2. Criteria: The following criteria shall be used to determine whether or not an act was motived by racial, religious, ethnic or sexual considerations.

3. The hate crime must involve a specific target, such as an individual, residence, house of worship, religious, political or ethnic organization, or business.

4. Graffiti must be racial, ethnic, religious or it must refer to a sexual orientation or lifestyle, such as a swastika, KKK, Nazi, or other hate group symbol, or epithet.

5. Bigotry must be the central motive for the attack, rather than economics or revenge as in other crimes.

6. Any assault against a person, in the absence of other apparent motivation, when initiated with racial, ethnic, religious, or homophobic epithets.

7. Vandalism to a house of worship, or structure housing ethnic, religious, political, or gay/lesbian organizations in the absence of other motives.

8. The use of obscene or threatening phone calls, containing racial, ethnic, religious or homophobic slurs.

Directive number 89-16 continues to list some sections of the California Penal Code (C.P.C.) which are applicable to hate crime activity and it also categorizes those activities as a misdemeanor or a felony. For example: “Injury or threat to person or damage to property because of specified beliefs or characteristics” is a misdemeanor (C.P.C. Sec. 422.6), while the “intentional interference with religious worship of another” is a felony (C.P.C. Sec. 11412).

Additionally, it lists specific sections of the C.P.C. that can increase the sentence if the crime is hate motivated as defined in law. For example, if a person were convicted of an assault he might be sentenced to six months in jail. However, if it were shown that the assault was motivated by hatred, the jail time might be increased to one year. In many cases, the hate crime assaults against gay or lesbian people are very easy to prove because the assailants often yell out “faggot” or “dyke” as they beat a victim they followed coming out of a gay bar. Even when arrested — and assailants DO get arrested — they often defend their actions by blurting out to the arresting officers something like, “Hey man, he’s just a faggot!” or “I hate queers,” or yelling over to the victim, “Fagot, I’ll kill you if you press charges!” That’s about all it takes to prove that the assault was hate motivated.

These vivid accounts of gay bashing are all assaults, but there are other types of hate crimes. The Los Angeles County Human Relations Commission, which is one of the agencies that record these events, established the following categories for hate crimes based on sexual orientation: Assault, Criminal Threats, Vandalism, Hate Literature, and Graffiti. Acts of discrimination against any minority groups, such as in housing, jobs, etc., are not generally included in hate crime statistics. For statistical purposes, hate crimes are limited to acts that cause personal injury or damage to one’s property. This is unfortunate because discrimination is obviously the most frequently committed crime motivated by hatred. And while this is true, those who seek legal redress as victims of discrimination, depending on the state’s statutes, usually must resort to civil action against the perpetrator.

Last year the Commission recorded a total of 672 hate crimes which represents an increase of 22 percent over the 1990 statistics. The breakdown of the basis for these crimes is as follows:

These statistics show that the gay community is sustaining the greatest increase in hate crime, a dramatic 36 percent. Gay men are now the most victimized, and, literally, the most assaulted group in the County of Los Angeles.

Since the Commission began gathering data on anti-gay and anti-lesbian hate crime starting in 1987, it has noted a significant difference between these acts and those motivated by racial or religious bigotry. Sexual orientation hate crime is most commonly expressed in the form of physical assault. Until the racially motivated homicides recorded in 1991, homophobic hate crime had been the most violent category, and even now anti-gay and anti-lesbian hate crimes are the most likely to involve an act of physical violence against an individual. (Hate Crime in Los Angeles County 1991, Los Angeles County Human Relations Commission, page 9.)

The chart “Most Often Victimized Groups Statistics,” shows that the three groups suffering most from hate crimes are gay men (21.8 percent of reported cases), and Blacks and Jews (each 19.4 percent of the reported cases). Attacks against these three groups accounted for over 62 percent of all hate crimes committed in Los Angeles County. The most horrifying data in this chart shows that of all hate crime perpetrated against gay men, 69.2% of those crimes were assaults, which is the highest percentage of violent attacks inflicted on any group. Also shocking is that hate crimes against gay men occur in public 50.3% of the time, meaning, I suppose, that perpetrators are not afraid to bash gay men in public.

Generally speaking, hate crimes against all groups of people are grossly under-reported because victims often feel very intimidated. Add to that the practice that apprehended assailants may serve little or no jail time due to plea bargaining, and the reluctance of city and county prosecutors to go to court when the evidence against an assailant is weak or marginal. This increases the sense of insecurity in the victim and the possibility that the released assailant (either after he or she serves time or without the assailant serving any time at all) will retaliate against the victim for pressing charges. Due to newer laws that require jail time for persons committing certain crimes, or laws being revised to require additional jail time such as in the commission of hate crimes, it appears that the police and the court system are putting more criminals away for longer periods of time.

For an update, see the section titled “Hate Crime in the LGBT Community,”